The Asuka, Nara, and Heian era

Utsunomiya in the Asuka to Nara era 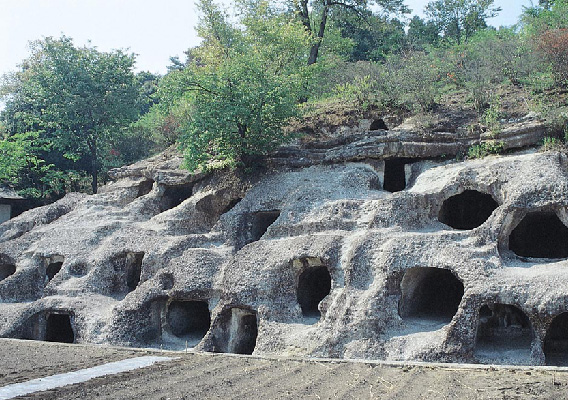 Nagaoka Hyakuana-kofun Tumulus (a tumulus with many grave-caves) In those days Tochigi Prefecture was called Shimotsukeno-kuni province which belonged to Tosando, the eastern mountainous district. While a location is called Kokufu where there was a government office ruling the province, the Shimotsukeno-kuni provincial Kokufu was placed in the current Tochigi City.

Shimotsukeno-kuni was separated into 9 guns or counties, and most of Utsunomiya belonged to Kawachi-gun county. A district government office which rules a county is called Gunga, and it was found by a recent excavation that the remains of Kamikounushi and Mobara government office were the Gunga of Kawachi-gun. It is known from the site of Suidoyama Kawarakama tile-kiln in Utsunomiya that they baked tiles used for Kokubun-ji Temple and the Kawachi Gunga office.

In the Nara era, Tosando Road ran in Shimotsukeno-kuni Province which was used for transportation of tax and military operation, and the road carried out a role of supporting a cultural interchange, too. In Utsunomiya, the sites where Tosando Road is thought to have run, are discovered in the remains such as Kamikounushi and Mobara government office, Touya and Nakajima district, and Kouzuke.

Shimotsukeno-kuni was considered important to suppress powerful families in Tohoku districts, and it also became a cultural base where Kaidan, or ordination platform was built at Shimotsuke Yakushi-ji Temple, the first platform in the eastern Japan of the Nara era.

Utsunomiya in the Heian era

Around this time, the center of Utsunomiya was called Ikebenogo as it was a wetland with many riverbanks, marsh, and ponds. There is a big pond to the immediate south of Futaarayama-jinja Shrine, and it is said that the pond came to be called Kagamiga-ike (mirror pond) because a mirror was found from it. It is thought that Futaarayama-jinja Shrine was recognized as a central Shinto shrine of Shimotsukeno-kuni province by the beginning of the Heian era.

In the latter half of the Heian era, it is said that a building was built around the current Utsunomiya-jo Castle site park, which later becomes a basis of Utsunomiya-jo Castle. The Utsunomiya clan became a noble family which took, for approximately 500 years, control of the Kinu-gawa River basin area ranging from Shimotsuke to Hitachi.

The Utsunomiya clan became a noble family which took, for approximately 500 years, control of the Kinu-gawa River basin area ranging from Shimotsuke to Hitachi. Many of village sites of this time were found in Utsunomiya City including the remains of Mizuhono housing complex, etc. While a pit dwelling of these days is rather small with a side length of approximately 4 meters, a dug-standing pillar building and a well are also discovered.

Oyaji Temple was worshiped by the common people from the beginning of the Heian era. It is around this time that the principal image of the temple, Senju-Kannon statue was carved which is a Japan`s Historic Site and Important Cultural Property.