Utsunomiya in the Jomon period

Approximately 15,000 to 12,000 years ago from now, a new age comes out where earthenware is made and a full-fledged bow and arrow becomes available. Because Jomon earthenware, used at that time, had a straw-rope pattern on it, which is rare in the world, the period up to about B.C. 300 is called the Jomon period.

In the incipient period, people lived in a small cave or behind rocks like the remains of Oyaji Temple Caves, or they built a dugout on the edge of a wider plateau to live in.

Probably because the climate was becoming warmer in the earlier period, people came to form villages in a wide area, and a scale of villages seemed to enlarge with stability of living.

While the population increased and large villages were built, a special village like the Negoyadai remains was also developed where it can be thought that some villages performed a meeting and a festival. 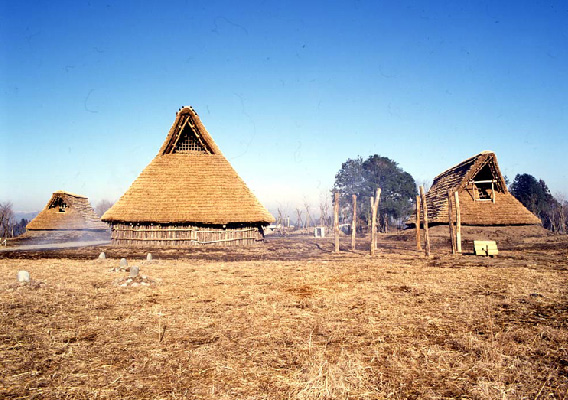 Negoyadai Remains When it became the middle period, the life of Jomon people became stable and the population increased more and more, which caused to generate a bigger village like the Takeshita remains or the Oshiroda remains. In this period there were a lot of artistic earthenware potteries with a luxurious pattern, and it is said to be the golden age of the earthenware.

When the Jomon period enters into the latter times, from the end to the last stages, it is observed that villages tend to become gradually smaller.

Nevertheless, a lot of villages like the remains such as Ishikawa-tsubo and Karinuma, etc. are observed, because a plenty of delicious foods from the mountains and the rivers were available around Utsunomiya.