The Meiji and Taisho era

Utsunomiya in the Meiji era 1

When the name of era is changed to Meiji in 1868, Haihan-chiken (abolition of feudal domains and establishment of prefectures) is carried out in 1871, 3-Fu or prefectures and 72-Ken or prefectures are instituted, resulting that Utsunomiya Prefecture is born.

While the turrets and gates of Utsunomiya-jo Castle which remained unburned in the Boshin War, were sold and/or disposed in 1872, new buildings came to be constructed one after another including prefectural offices, hospitals, and post offices, etc. A figure of a modern town began to appear in Utsunomiya after the war damages.

When the prefectural office was moved to Utsunomiya in 1884, a various development was carried out, along with the construction of the new prefectural office building, including the main streets completion, and the buildings of other public authorities and schools, etc., and thus Utsunomiya became the center of politics, culture, and economics of Tochigi Prefecture both in name and reality.

Utsunomiya in the Meiji era 2 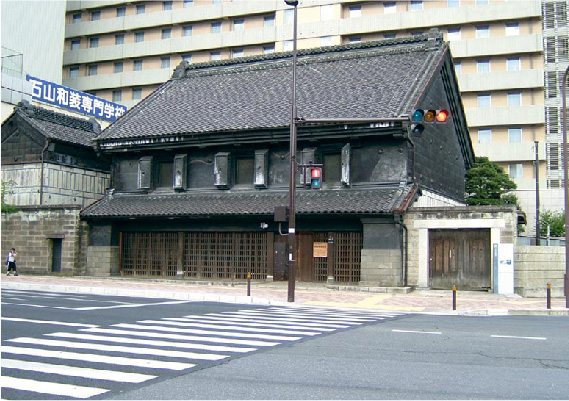 The old Shinohara`s manor house In 1885, Utsunomiya Station was born.

15 villages were inaugurated in 1889, which included Utsunomiya-machi and formed the current Utsunomiya City.

The 14th Shidan or army division was placed in Utsunomiya in 1908, and Utsunomiya came to have a new face as “a military capital.”

Utsunomiya in the Taisho era

Under these circumstances, the Great Kanto Earthquake occurred on September 1, 1923. The old Imperial Hotel of Tokyo, built with Oya stones, remained unburned, and the excellent quality of Oya stone was recognized in the aspect of its high resistance to fire and earthquake, which made the stone become famous as a first-class building material in a single bound.